We are Jeroen and Brigitte, we're living with our 4 dogs and 1 cat in a small town in the North of the Netherlands.

Our first dog, the oldest of the three, is an American Staffordshire terriër (without a pedigree) female named Ziva. She is born on 28th of May 2011. She's got some health issues and we're hoping she will be around for another couple of years.

Our second dog is a Dutch breed, a Markiesje. His pedigree name is Elliot Charly v.d. Talerna, his daily name is Pim. Pim is born on 19th of April 2014. He was a stud male, but now he's retired. We did some dogshows with him. His show titles are: Dutch junior Champion, Dutch Champion, BeNeLux winner NL & BeNeLux winner BE. He likes doing Agility and we're doing time to time some Agility competitions.

Our third dog is our Norwegian Lundehund Kensi, pedigree name Wandering Glider of Vorkosmia. She is born on 5th of May 2018. She started about a year ago with Agility and she likes doing dogshows. Her show titles are Belgium junior champion, Dutch junior champion and we're hoping adding more titles in the future. She is the mother of our first Norwegian Lundehund litter.

Our fourth dog is also a Norwegian Lundehund. She's called Frida, her pedigree name is Lunmar's Mamma Mia Anni-Frid. She is born in our house on 2nd of July 2021. When she's old enough, we will go to dogshows with her. 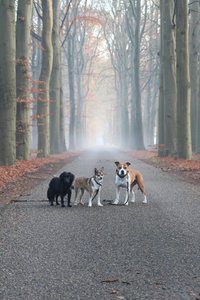 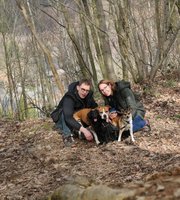